Members of the Executive Council as well as hundreds of the Community’s members attended a two-day event that marked the name day celebrations for Adelaide’s first Greek Orthodox Church, the cathedral of Archangels Michael & Gabriel on Franklin Street, on Tuesday 7 and Wednesday 8 November 2017.

This year’s Feast of the Archangels Michael and Gabriel “Taxiarchis” though coincided with the 80th Anniversary of the Greek Women’s Society, the Society behind the construction of the original Taxiarchis church back in 1937, at the same spot where the Cathedral is standing today. To celebrate this special event and to acknowledge the strong bond between the Cathedral and the Society, a commemorative bench was unveiled at the church’s courtyard as part of its Name Day celebrations.

During the unveiling ceremony, the President of the Society Mrs Roula Soumas said it was only a small gesture to thank and honour those ladies who started the Society in the 1930s and who managed to get the first Greek Orthodox church stand in South Australian soil.

“We are very touched to see that after 80 years our Society has managed to maintain through this church our religion and faith,” she said. 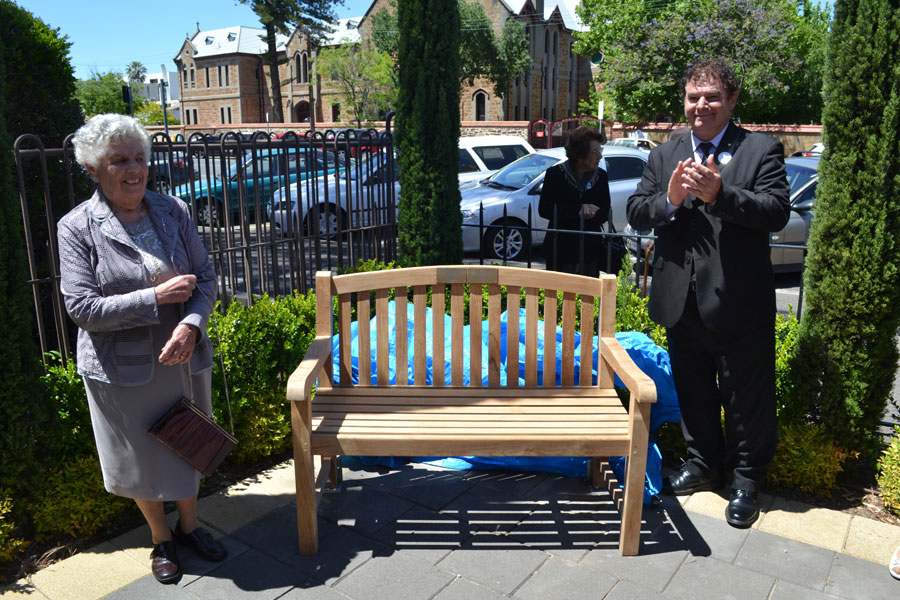 It was a touching moment when Mrs Mary Mangos, daughter of the late Katholiki Anastasas, the woman who established the Greek Women’s Society, unveiled the bench on behalf of the past and present members of the society, who worked hard for the betterment of the lives of many Greeks who migrated to Australia at the beginning and middle of the century.

The Greek Women’s Society Taxiarchis, was established in 1937 with the initial purpose of fundraising for the building of the original Church of the Archangels Michael and Gabriel in Adelaide, the first Greek Orthodox Church of Adelaide as well as supporting many other philanthropic causes.

“Who would have thought back in 1937 that eight decades later, we would be unveiling this bench at the very same place our first church was built,” Mrs Soumas said.

In the meantime, Tuesday night Bishop of Adelaide Chrysostomos along with the rest of the Community’s clergy conducted the Great Celebrative Evening Vesper in the presence of the Executive Council members as well as dozens of parishioners.

The Vesper was followed by the holy sacrament of the Unction. Meanwhile, the ladies from the Cathedral’s fellowship had arrived earlier at the church in order to decorate the interior as well as the holy icon of the Archangels. The Evening Vesper was followed by the traditional making of honey puffs across the road at Olympic Hall, prepared by the ladies of the Cathedral’s Fellowship.

The two-day event continued on Wednesday morning as hundreds of parishioners came to the Cathedral to attend the Great Divine Liturgy. The Hon Michael Atkinson, Member for Croydon and Mr Bill Gonis OAM, President of the Greek Orthodox Community of SA were amongst the official guests that attended the morning service. The Divine Liturgy concluded with the traditional procession of the holy icon around the church. The morning service was followed by lunch at Olympic Hall featuring all the favourite grilled delicacies whereas the ladies from the Greek Women Society prepared the popular honey puffs ‘loukoumades’.