Arts and culture met under the colours and sounds of Hellenism on Friday 4th of October 2019 at Olympic Hall as the Odyssey Festival launched its 14th journey of the senses.

A Festival that takes everyone on a cultural adventure through the Greek arts, bringing the vibe of Greece on our doorstep.

“The President of the Greek Orthodox Community of S.A. Bill Gonis said the Odyssey event serves as an example of our commitment, to both our own community and to multiculturalism in our great State. 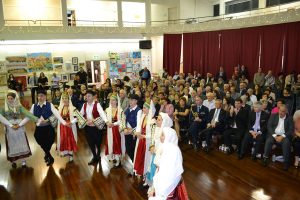 We celebrate this year, our 14th Annual Odyssey cultural event with the inspiring theme: “Education Through Greek Arts”, he said.

Attending the Odyssey launch, the Hon David Pisoni, Minister for Innovation and Skills, representing the Premier of South Australia The Hon Steven Marshal said the Greek Community has positively changed the way of life in South Australia.

“We are proud of your passion for preserving and sharing your culture and of what you have achieved as a Community”, said Minister Pisoni.

The Odyssey launch drew hundreds of artists, friends of the arts, members of the wider community and several members of Parliament.

All mingling and catching up with the latest chatter, enjoying the familiar hospitality of the Greek Community in an artistically decorated Olympic Hall.

With the formal part proceeding, official guests addressed organisers and patrons, thanking the Greek Community for their endless contribution to the State’s cultural character.

“South Australia is extremely fortunate to have such a culturally diverse population”, said The Hon Irene Pnevmatikos MLC, representing the Leader of the Opposition Mr Peter Malinauskas.

The formal part featured a cultural program perfectly depicting the Festival’s character and purpose as the leading event in the State’s arts scene.

The Dance Academy took everyone on a virtual journey to Greece through the dazzling traditional costumes and dance skill they exhibited.

Following the Dance Academy, Greek Band ‘Floga’ (which translates to “Flame” in English) put the house on fire with their performances and great selection of Greek songs.

The formal part concluded with the Odyssey Art Prize.

Kathleen Patitsas won the first prize for her work “Yiayia” followed by Nicholas Tsatsaronis and Joanna Kalambogias Vlassopoulos for their work “Ia-Santorini” and “The Lament” respectively.

The Odyssey Art Prize is kindly sponsored by the Greek Workers Educational Association of S.A ‘PLATON’.

The list of other official guests who attended the event included His Excellency The Hon Hieu Van Le, Governor of SA, her Excellency the Hon Martha Mavrommati, High Commissioner of the Republic of Cyprus in Australia, the Hon Connie Bonaros, Member of the Legislative Council, Mr Frank Pangallo, SA Best, Acting Consul General of Greece Mr Athos Marousias on behalf of The Hon Georgios Psiahas, Consul General of Greece in S.A,

The Odyssey Festival will continue until the 17th of November.