Christmas arrived a week early for the Greek Orthodox Community of S.A. as the State Treasurer Mr.Tom Koutsantonis announced a $200,000 grant from the South Australian Government would become available to the long standing Community of 86-years, to be used specifically for the renovations of its now dated Olympic Hall.

Mr. Koutsantonis made this announcement during the Community’s Annual Volunteers Christmas dinner at Olympic Hall on Thursday evening 15 December 2016. 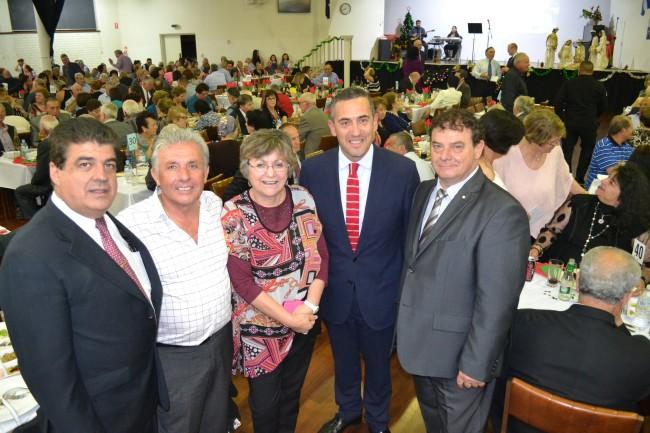 Our Hall dates to the early 1960’s where it was the centre of all activities for the Greek Community at large and holds fond memories for all who attended functions at the Hall during the halcyon days. So these funds will be used to bring the facility up to a more modern standard.

“This is our Government’s small gesture to you to say thank you for all the hard work you do”, the Treasurer said. Inferring to the great work both past and present that the Community does in meeting the needs of the Greek Community of Adelaide and the suburbs in general.

President of GOCSA Mr Bill Gonis responded by stating “we are most grateful to the Treasurer and State government for their generous contribution, which came as a surprise but a timely surprise as our facility is now in need of an upgrade to meet current building standards”.

The annual Christmas dinner is a small way of showing its appreciation by the Community towards its many volunteers who work tirelessly throughout the year to the success and progress of the organisation.

The composition of the invitees varied from those who volunteered for working bees throughout the year as well as teaching and admin staff who had contributed over and above the norm, because it is their Community and they dearly want it to succeed.

Olympic Hall was yet again in its usual glory as Christmas decorations and the familiar warmth made justice to its character as the House of Hellenes in South Australia.

The evening commenced with an welcome and introduction by MC Ms. Himo Tsakalos followed by the President, Mr Gonis, delivering his Christmas message.

Mr Gonis thanked all volunteers saying they are the backbone and the driving force of the community.

“These volunteers strengthen and support the Greek community and in so doing the South Australian community as a whole is much better for it” Mr. Gonis said.

The President’s message was followed by supper and then after the break we continued with the Con Marinos Awards presentation.

The Con Marinos Awards are presented to students who have achieved excellence in their thesis as well as undergraduate studies in their chosen field of study at Flinders University.

The first Award was presented to Ms. Marialena Terzaki for her thesis “The Novel as Textbook: Using Literature as a Teaching Material to Teach Greek as a Foreign Language to Adults”.

The second award goes to Mr. Ira Herbold from the Faculty of Social and Behavioral Sciences with Flinders University and the essay title for the award is: “Epistemology Wars: Knowledge and cultural imperialism in the history wars”

And the third prize was presented to Ms. Anne Mignone for her essay “Is offshore processing legal?” Ms. Mignone studies at the Faculty of Education, Humanities and Law of Flinders University.

Awards of excellence were also presented to students of the Community’s Greek schools.

The evening then continued with live music from John and Tambika.