The Governor of South Australia, His Excellency The Hon Hieu Van Le brightened the Community’s annual Christmas dinner as well as the Con Marinos Awards presentation as he attended the high profile event with his wife, Mrs Lan Le on Thursday 10 December at Olympic Hall. Mr Hieu Van le made history for the Greek Orthodox Community as it was the first time in the organisation’s history that a State Governor attended the annual Christmas dinner.

The Christmas dinner is a gesture of appreciation towards the Community’s volunteers who work tirelessly throughout the year towards the success and progress of the organisation. Working bees from all areas of the Community, teaching and admin staff and a number of official guests felt the warm welcome under a festive atmosphere enhanced by the Community’s hospitable spirit. 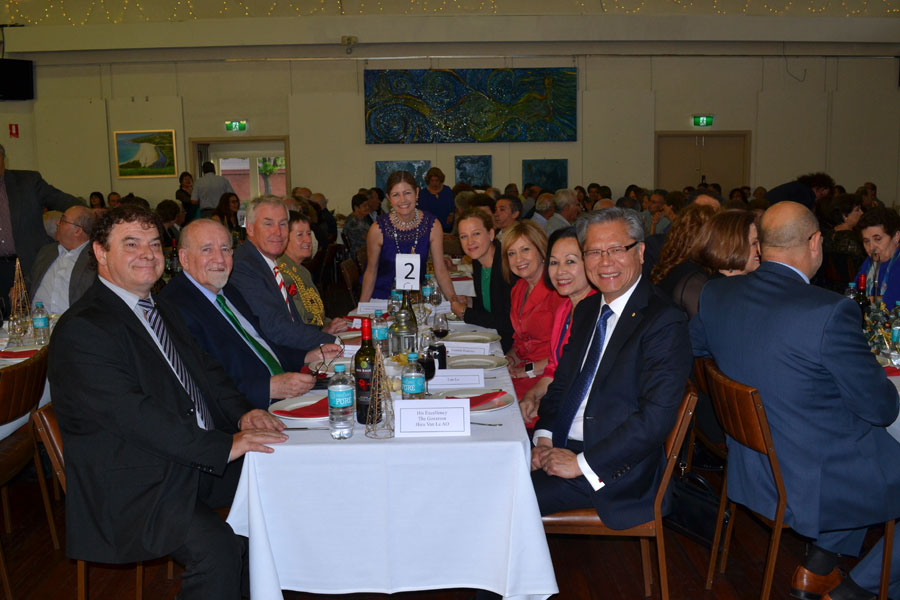 Olympic Hall was yet again in its usual glory as Christmas decorations and the familiar warmth made justice to its character as the House of Hellenes in South Australia. The evening started off with an introduction and welcome by MC Mr George Petrallas followed by the President, Mr Gonis, delivering his Christmas message. Mr Gonis thanked all volunteers saying they are the backbone of the organisation. “These volunteers strengthen and support the Greek community and in so doing the South Australian community as a whole ,” Mr Gonis said. The President’s message was followed by supper and the event continued with the Con Marinos Awards presentation.

The Con Marinos Awards are presented to students who have achieved excellency in their thesis in their area of study at Flinders University. The Awards were presented by His Excellency Hon Hieu Van Le, adding to the prestige of annual presentation. The first Award was presented to Ms Maria Shialis for her thesis “The Settlement of Greek-Cypriot Migrants and Refugees in South Australia: 1945-1980”. This year Ms Shialis completed her PhD in Greek Studies. The second award was presented to Mr Darren Clarke for his essay “A Critical evaluation of Australian Federal Government policies and practices enabling what has been colloquially known as the North Territory Intervention in terms of global understandings of human rights”. Mr Clarke have just completed a Bachelor degree of Social Work and Social Planning with Flinders University . The third Award was presented to Ms Uschi (Usrula) Artym for her essay “Overturning the Legal Fiction of Terra nullius.” Ms Artym is currently on her second year of studies in Archaeology at Flinders University.

With the conclusion of the Awards presentation, Professor Michael Tsianikas congratulated all students for their successful efforts saying it is important to see such efforts been recognised in the name of Hellenism in Australia. The night continued with live music by Adelaide’s favourite George Dalagiorgis and Jim Giannou.