The Greek Orthodox Community of S.A. honoured Greek National Day 25th March during the weekend holding separate events on the 23rd and 24th of March.

In his opening speech Mr Gonis spoke about the multi-dimensional action plan of the Greek Community and the tight bond with the national centre, as he welcomed the Government officials from Greece, Cyprus and Australia as well as the hundreds of invited guests,.

Addressing the invited guests, Greece’s Deputy Foreign Minister Terence Quick talked about the current developments and the geopolitical crisis regarding the energy resources in the eastern Mediterranean region and the Aegean sea.

Mr Quick also said that an attempt to bring stability in the politically unstable region of the eastern Mediterranean and the Aegean sea is under way with a tri-partisan agreement between Greece, Cyprus and Israel as well as Greece, Cyprus and Egypt, also aimed at protecting Greece and Cyprus’ rights.

“We don’t see any enemies on the other side, all we are doing is to secure our freedom and protect our borders, both in Greece and Cyprus expecting our “nervous” neighbour to respect International and European rights,” he said.

At the same time, the Greek Official thanked the Australian Government for defending the Cyprus issue as well as supporting Greece on various national and international affairs.

Making reference to the 1821 Greek Revolution Mr Quick said that Greeks abroad always take initiative and put things in motion when their homeland is under threat.

“It was the Greeks of Europe who not just funded but lobbied in favour of the Revolution trying to get the allied forces to come for aid,” he said.

Apart from going through the political agenda, Mr Quick Mr Quick announced the Greek Government is relaunching a youth program where in the past, Greek youngsters from Australia were able to travel to Greece for a holiday.

The program will start during the European summer.

Concluding, the Greek Deputy Minister said that the Greek Orthodox Community of South Australia is the most active and best organised Community he’s ever seen.

“Straight after the deadly fires in Mati July last year, it was this Community here that rang my office first, letting me know that they were raising funds for the victims,” he said, also thanking the Greek Orthodox Community of S.A. for its long-running support and solidarity towards Hellenism. 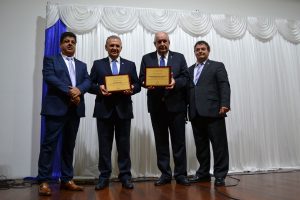 The latest political developments in the sensitive areas of the Mediterranean and the Aegean seas as well as the ongoing provocations of Turkey were the key points in the agenda of Mr Fotiou, Commissioner for Humanitarian Affairs, Overseas Cypriots.

“Hellenism is going through some very difficult times. With your presence here, Greeks and Greek-Cyprians, we send a strong message out there, that our nations join their forces in order to face these difficulties successfully,” he said.

The Hon David Pisoni MP, Minister for Industry and Skills, on behalf of the State Premier Hon Steven Marshall, Dr Susan Close, Deputy Leader of the Opposition on behalf of the Leader Mr Peter Malinauskas and Federal Member for Hindmarsh Mr Steven Georganas all extended a welcome all guests.

Mr Quick and Mr Fotiou were accompanied by the Greek Ambassador in Australia Hon Ekaterini Xagorari, the High Commissioner of Cyprus in Australia Hon Martha Mavrommati and the new Consul General of Greece in S.A. Hon George Psiahas.

The evening concluded with a bright cultural program featuring Cretan dances performed by the Community’s Dance Academy as well as live music by Dr Demeter Tsounis and vocals by Maria Vouis and Vasilis Ioannidis, performing two of Mikis Theodorakis’ songs, “Small nation and yet they fight” and “Everyone is thirsty”.

MC for the event was the Community’s General Secretary Mr Peter Ppiros.